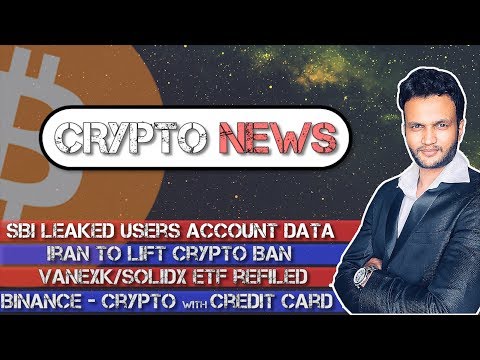 I'm trying to put together a list of what's coming out this year. Have this very simple list so far. Anyone care to add anything or suggest some better dates?

On the new batch of comments to the SEC about the SolidX ETF, some honorable mentions, and some negative comments

The SEC just posted a new batch of 286 comments on the SolidX ETF, bringing the total to 1147. I am skimming through them and posted some of the best already to this sub.
The vast majority are short comments, obviously submitted in response to some mail-in campaign. The names sound very much like the invented ones of spam emails that I have been receiving for years. A telling detail is the lack of a middle initial.
They also mostly repeat the same arguments, and many are obviously written by people who don't understand what is the ETF, only that if that SEC thing approves it then the bitcoin price will go to the moon. I have just seen a dozen that start with the same phrase "I hearby[sic] state my acceptance and full support..."
Some are so sloppy that they submit with one name but sign with a different name.
Here are some honorable mentions:
A few negative comments:

As VanEck Securities and SolidX Management wait for the green light from the U.S. Securities and Exchange Commission (SEC) on their Bitcoin ETF proposal, they are rolling out a ‘limited’ version to institutions. The modified investment product will be offered through an SEC exemption — a first for the cryptocurrency industry.
Van Eck Provides Institutional Investors with ETF Alternative
The third quarter of 2019 has been dominated by news and announcements related to institutional products in the cryptocurrency space. Binance and Bitfinex announced cryptocurrency derivatives; Bakkt has set aside the date of their launch and now Van Eck wants to speed up the Bitcoin ETF approval process.
The investment management firm, in partnership with SolidX, plans to start selling shares for the digital asset ETF by releasing a limited version of the product. The limited version of the fund will be aimed at certain institutional investors like banks, hedge funds, brokers – and excluding retail investors.
Van Eck Takes Advantage of Rule Exemption
The two dominant players pushing for a Bitcoin ETF are leveraging an SEC exemption to release a limited version of the fund.
It’s all thanks to the SEC’s Rule 144A, which allows securities to be traded among qualified institutional buyers without SEC approval. Yet, the ‘limited’ ETF will have shorter holding periods and will be available to a very small group of established financial firms.
The SEC is still holding out on a few applications which it recently said it needed more time to make a decision. Three firms, which include Van Eck and Solid X, will find out if they have been successful with their proposal for a Bitcoin ETF towards the end of September and into October.
While this limited version is much closer to the already existing offering from Grayscale Investments as a private fund, Van Eck claims that this will show the regulator that a Bitcoin ETF can work.
It’s undeniable that a Bitcoin ETF has been one of the most-awaited events in the cryptocurrency world for some time, but the SEC is adamant that some of the concerns regarding price manipulation and the commission’s access to monitoring haven’t been sufficiently addressed.
The SEC representatives didn’t want to comment on Van Eck’s move.

We have observed one of the biggest collapses of the US stock market in recent years. The technological index Nasdaq dropped by 4.43% over just one day. Stay in touch with the current events of the week covered in our analytical report.